Lumps, blisters and neckdowns can cause any number of problems on the cable's electrical properties.

Neckdowns or a "short-term reduction" in the diameter of the cable can happen because the cable was pulled suddenly forward while the plastic insulation was being applied at constant speed or can occur as a result of momentary starvation of the extruder or other short-term loss of plastic pressure for some reason.

Lumps on the other hand can occur from bumps on the surface of the cable as result of build up of hot plastic around the die which occasionally lets go or can occur from a sudden pull of the payoff or bumpy cores.

Your product specifications are very clear with regards to both the minimum thickness of the insulation and the jacket or sheath. Neckdowns, blisters and lumps are not acceptable.

The BETA LaserMike LN3000 Series gauges are designed for the fast, accurate detection of lump and neckdowns in the diameter of the cable. 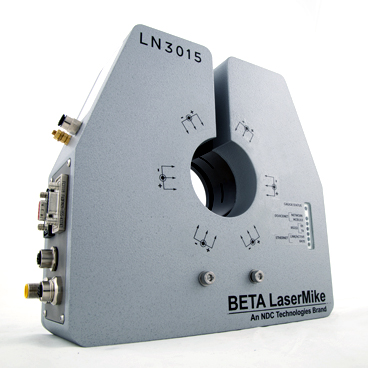 Can't find what you are looking for?

If you're looking for a particular product or system solution to an application, or a specific resource item, simply enter the keywords below to search and view details.

If you still can't find what you're looking for and would like to speak with one of our product and application specialists near you, you're just a click away.